Bureau Waardenburg tagged eighteen Sandwich terns in the ‘De Putten’ nature area near Camperduin in the Netherlands. They are now tracking the birds and using models to establish a clearer picture of offshore flight patterns and the possible effects of wind farms, now and in the future. 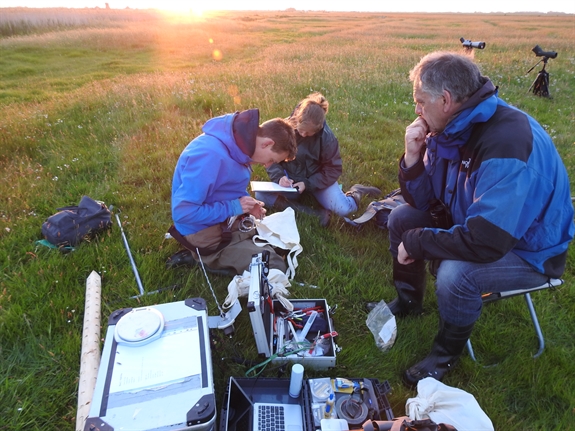 The Sandwich tern was selected as one of the target species for a more detailed study of wind farms and bird displacement. The data will allow us to identify potential habitat loss.

We still don’t know enough about how displacement may affect seabird populations and result in a loss of habitat. There are promising avenues of research that may allow us to fill the gaps. Recently, a relatively large colony of Sandwich terns settled quite close to two operational offshore wind farms and a large wind farm to be constructed in the near future, generating fascinating research opportunities.

We can study bird colonies which are so close to operational offshore wind farms (in other words, within a range of approximately forty kilometres) that the wind farms qualify as potential feeding grounds. By monitoring a number of adult breeding birds from these colonies for as long as possible during the breeding season, we hope to identify a wide range of preferred feeding areas. On the basis of that information, we will be in a position to assess the potential impact of the wind farms.

Sandwich terns settled in ‘De Putten’ in two large waves this spring. The first 1900 pairs arrived in late April/early May 2019. Bureau Waardenburg captured eighteen of these birds and tagged them with GPS loggers. In mid-June, a second group of 1600 pairs settled in the area, bringing the total to a record number for the area of 3500 pairs. Alongside the tagging activities, food protocols were logged every week until mid-July. In combination with the foraging location, we now have clear information about the amount and type of prey being brought back to the colony. 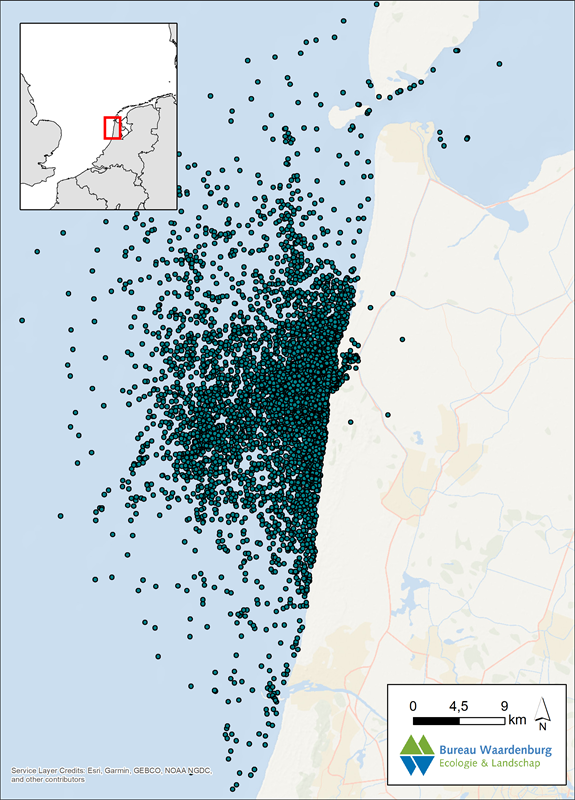 The Sandwich terns in ‘De Putten’ have prospered this season in general and the colony has produced a large number of chicks. More specifically, the birds with loggers have been doing really well: of the eighteen birds, fifteen stayed in the colony until mid-July and they probably fledged chicks successfully. They left the colony with their chicks and were sighted again at Texel (north of the colony), the Sand Motor (off the coast of Zuid-Holland) and in France. They are probably now on their way to Africa. One tern was captured and eaten by a peregrine shortly after tagging. The logger was recovered in a field nearby but the amount of data logged was obviously small. 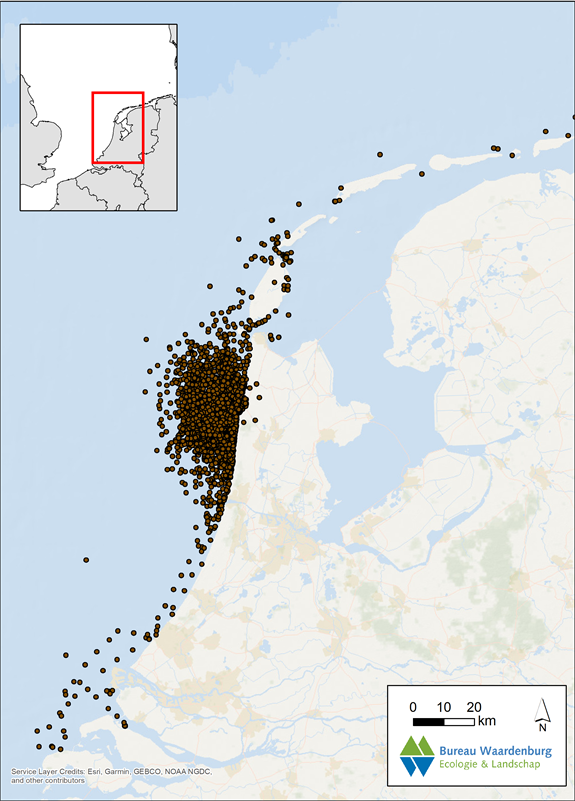 In late September, the base station was recovered to analyse the movements of the birds. The next step – after the completion of this project over the next two breeding seasons – will be to draw on the analysed data to refine a habitat model so that we can predict the offshore distribution of coastal breeding terns. Those predictions will cover not only the distance to the colony but also several other factors that determine the suitability of feeding grounds, such as the distance from the coast, water depth, water temperature and turbidity. The analysed data will also be used in another model to focus on foraging terns and quantify the displacement patterns associated with the offshore wind farms. We hope this will help us to predict bird responses to planned wind farms.

More GPS data and concurrent food protocols will be collected over the next two breeding seasons (2020 and 2021).