Bird behaviour in a wind farm

Operational wind farms cover only a limited surface area in the North Sea. So the impact of the displacement of bird populations and the concurrent potential habitat loss would appear to be very limited at present. However, as the roll-out of offshore wind energy continues, it is becoming essential to understand how individual birds and bird populations may be affected.

Studies of seabirds so far have shown that several species tend to avoid wind farms. However, as these studies are typically conducted from moving platforms (ships or aircraft), it is not known how birds behave once they do enter a wind farm. Birds that find themselves between operational turbines might be intimidated and their normal feeding behaviour may be affected.

On the other hand, there is no risk of collisions between the birds and rotors in the airspace below the rotors, on the surface or under water. Seabirds may actually move safely into a wind farm if they can cope with the presence of turbines and if feeding conditions in the wind farm are good. The feeding behaviour of these birds, such as diving, may even be regular and normal. Over the years, they could learn to exploit this new habitat. 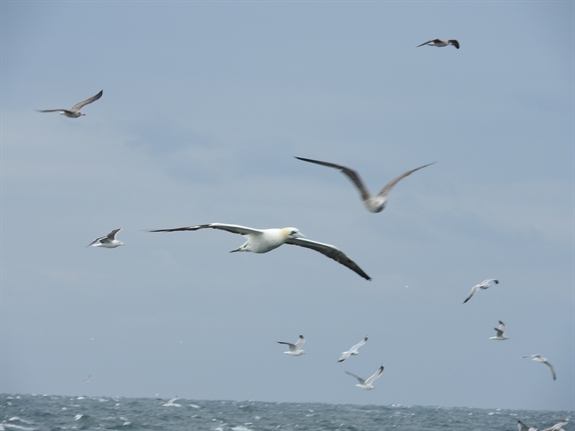 So even though earlier studies have shown that wind farms lead to the displacement of seabirds, that effect may disappear in the longer term. If this happens at a large enough scale (and for all species concerned), displacement may turn out not to be a major concern for seabird populations. However, the issue should still be considered with care: the current situation, with a very limited surface area covered by wind farms, is unlikely to be representative of the situation in 2050 and later after the full realisation of the offshore wind ambitions of the North Sea countries. Moreover, if there is habitat loss, the effect is likely to be more severe than any other potential wind farm impact.

Given all these possibilities and uncertainties, two marine ornithologists from Wageningen Marine Research spent two days in January 2018 watching seabird behaviour from a fixed platform at the periphery of the offshore wind farm Eneco Luchterduinen. The aims of this pilot study were to investigate bird behaviour and possible habituation, and to determine whether meaningful observations of behaviour could be made from a non-moving platform that is part of the wind farm scenery, in other words one of the turbine foundations.

Two auk species, the common guillemot and the razorbill, were seen to move through the wind farm. Birds were frequently seen flying, swimming, and diving (presumably for food). Northern gannets were also regularly sighted inside the perimeters of wind farms but only passing through, not swimming or diving. Even though the observations covered two days only, bird numbers in the wind farm seemed to be considerably higher than those observed during earlier T-0 and T-1 surveys (a true comparison is not possible because different methods were used). A tentative conclusion could be that these birds (both auks and gannets) are growing accustomed to the presence of wind farms in their environment. However, we can conclude from this pilot study that meaningful behavioural observations can be made from the turbine foundations. The project report concluded that more observations of this kind could be useful, both from turbines on the periphery and from turbines deeper inside the wind farm.