Outside the territorial sea

Extends beyond the Dutch territorial sea. Due to the proximity of the other North Sea States, the EEZ does not extend to the maximum 200 nautical miles as allowed under the Convention on the Law of the Sea. The outer limit of the EEZ corresponds to the boundary of the Dutch part of the continental shelf (DCS).

This includes the part of the seabed below the North Sea and its subsoil, located outside the Dutch territorial sea. The outer boundary is defined by treaties concluded with Belgium, Germany and the United Kingdom.

This area is located between the border of the 12-mile zone and the outer limit of the DCS. Within the fishing zone, ships under the flag of an EU Member State and registered within the territory of the European Union have, in principle, equal access. Although due to the establishment of the EEZ, this area has lost its significance in terms of exclusive jurisdiction with regard to fisheries, its meaning is important for historical rights, references in still prevailing regulations and references in new international regulations for which not all Member States have established the same zones.

This zone connects to the territorial sea and extends up to 24 nautical miles from the coast. This zone may be monitored to ensure compliance with rules on customs, taxes, immigration or public health applicable within the national territory or the territorial sea. It is also possible for certain powers to be exercised regarding archaeological and historical objects.

Strictly taken, there are no geographical boundaries for taking action on the high seas ('intervention') regarding vessels involved in accidents within the meaning of the North Sea Accident Control Act and the International Intervention Convention. One criterion is whether vital Dutch interests are at stake due to the accident, irrespective of the place of the accident. To establish a certain operationally workable area demarcation, the North Sea Accident Control Act applies to the Dutch territorial sea, as well as to that part of the high seas that connects to it and which extends in the north to the latitude of 56° north latitude, and in the south to the latitude of 51°10’. 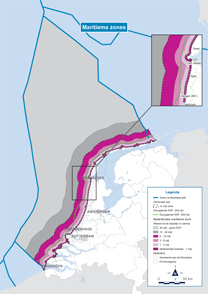