Permits on the North Sea

On the North Sea, there are a number of laws in force that make permits obligatory for certain activities. Not all laws are applicable everywhere on the North Sea. In a law, it must be stipulated whether that law applies only inside Dutch territorial waters (the 12-mile zone) or also outside those waters (the EEZ, Exclusive Economic Zone). The following Dutch laws apply to the entire EEZ: the Water Act, the Mining Act, the Flora and Fauna Act, the Nature Conservation Act and the Earth Removal Act. As far as the permit obligation is concerned, the Monument Act extends to the contiguous zone (the 24-mile limit). In general, all ‘normal land laws’ also apply in the territorial waters.

It is possible to sail on the North Sea without permits. Needless to say, you should at all times comply with the regulations in the Shipping Traffic Act and with the Maritime Regulations for territorial waters. Furthermore, you must remain in contact with the Coastguard and the various port authorities. Recreational use of the North Sea and numerous military activities are also possible without permits.

For which activities is a permit obligatory?

Dumping is prohibited, in principle. Substances currently being discharged into the North Sea mainly consist of discharges of non-contaminated dredging spoil, which are in accordance with the Soil Quality Decree (Besluit Bodemkwaliteit = Bbk). The dredging spoil must be a useful other application and may therefore not be intended as the dumping of a waste substance. Before dredging spoil is dumped, a study into the chemical quality of the spoil must first have been conducted. Dumping may only take place after it has been demonstrated that the standards are being complied with. Other discharges, such as cooling water and wastewater from sewage water purification plants, for example, require a permit in accordance with the Water Act.

You need a permit in accordance with the Water Act to build or position ‘installations’ in, on, above, under or over the seabed of the North Sea. Examples include structures for fish breeding or for collecting mussel seed, positioning wind turbines and other large structures, or trenches that have been excavated for pipelines and cables. If such structures also fall under the Mining Act, then you only require a permit in accordance with the Mining Act.

Activities in or in the vicinity of a Natura2000 area are only permitted if you have a permit in accordance with the Nature Conservation Act. You must first conduct an ‘appropriate assessment’ before applying for the permit.

Activities that endanger protected animal species require an exemption from the Flora and Fauna Act. Protected animals on the North Sea mainly involve marine mammals, birds and a large number of fish.

Many shipwrecks lying on the seabed and other man-made structures are regarded as archaeological objects and fall under the Monument Act. You may only carry out activities in the vicinity of such objects if you have a permit in accordance with the Monument Act. 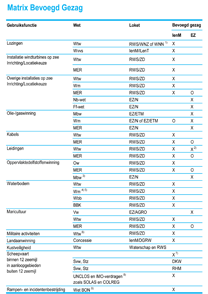