More than 7% of the Dutch part of the North Sea is available for military purposes. This includes artillery exercises, flight exercises and exercises in mine disposal. There are also two former ammunition dumps in the North Sea, where mainly British and German ammunition was deposited after World War II. The space for military use has been established in the Second Structure Plan Military Land and the National Water Plan 2009-2015. 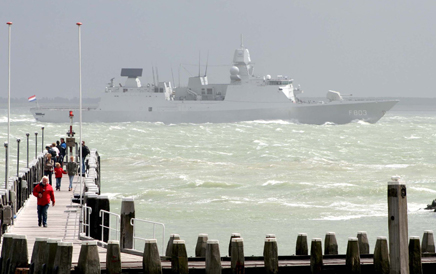 They show which shooting and exercise areas have been set up in and over the North Sea and the Wadden Sea. When no exercises are being held, these areas are also available for other uses.
In the period 1945-1948, ammunition (mainly British and German) was dumped in two places in the North Sea. The map indicates these locations as ammunition dump locations. Research has shown that this did not result in any environmental damage. During artillery training, ammunition from the shore ends up in the sea. The Ministry of Defence has the requisite permits for these activities.

Harmonisation of military and other use

Military use and other functions are harmonised with each other. In some cases, the training areas are restricted areas for all other activities during exercises.
The use of military sites within the Dutch EEZ is hardly expected to change in the coming years. Due to the increasing spatial pressure in the North Sea, combined use of training areas may become more of a focal point, for example, by temporarily opening a military area for the extraction of sand. When considering a permit application for the extraction of surface minerals in military training areas, Rijkswaterstaat liaises with the Ministry of Defence.

The planning and spatial development for shipping or for activities with fixed installations, such as wind farms, platforms for oil and gas extraction, and cables and pipes, requires coordination with the military use of the North Sea. The aim is to make multiple use of space within military training areas to the extent possible. In principle, oil and gas extraction with mobile installations is possible within a certain period. When granting permits in the framework of the Mining Act, the competent authority harmonises the extraction method, location and period with the Ministry of Defence.

Effect of military activities on the natural surroundings

Military activities can lead to the disruption of marine fauna due to the noise and vibrations they produce. Moreover, ammunition remnants end up in the North Sea during artillery training. Ecological research has not shown that this results in any environmental damage. Artillery training diminished by over 25% in the last ten years. In the management plans for the Natura 2000 areas at sea and in the coastal area, the military use is also assessed in relation to the ecological objectives of the corresponding area. 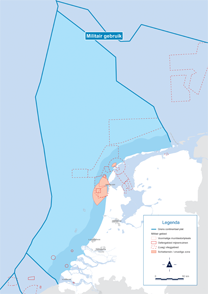