Offshore designated uses cannot be separated from (related) designated uses on land. The interaction between use of the sea and use on land plays a role in spatial planning, in natural systems, in a social/cultural respect and also in terms of social and administrative involvement. 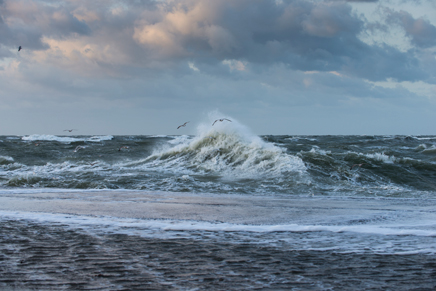 The long-term vision of the North Sea and the Maritime Spatial Planning Directive asks for the interaction between land and sea to be made transparent. This involves a broader perspective than just the coast and the Wadden area, which the National Water Plan focuses on separately. The interaction also relates to (the use of) the saline inland waters and transition waters and the economic, ecological and socio-cultural relationship with the sea further inland.  It goes further than those locations where coastal defence, coastal ecology and coastal tourism/recreation require attention and land and sea in that respect are each other's decor, such as the logistical flow from sea to land and vice versa and the direct or indirect ecological connections further inland.

A number of designated uses, particularly shipping and fisheries, have traditionally been connected to the land. After all, areas on the coast have historically been settlement areas due to the proximity of fishing grounds and a good connection with other areas (overseas). From the perspective of shipping, it is not just about ports and the excellent connections with the hinterland by way of the rivers and canals but also about shipbuilding. Thanks to those waterways, shipbuilding in the Netherlands is distributed over the hinterland. For the fishing industry, the connection with and access to the sea has always been important for fishing communities, fishing ports and the processing industry.

The flipside was that the land had to be protected against the influence of the sea, such as flooding caused by storms and the intrusion of salt into agricultural areas. The fundamental principle of the coastal defence policy is that it should be ‘soft’ where possible (by means of sand replenishment using sand from the sea) and ‘hard’ where necessary (flood defences). The Dutch water policy focuses on conserving freshwater and preventing the intrusion of salt water by dividing the river discharge and the location of inlet points for drinking water and agricultural water. To a large extent, these aspects have spatially shaped the Netherlands.

In recent decades, other designated uses of the sea have emerged, each with their own dependence on the land. For the extraction of oil and gas, and more recently the generation of sustainable energy with mainly offshore wind turbines, pipelines and cables connect the platforms and the wind farms with landing points on the coast and then with the hinterland. The onshore tourism and recreation sector was partly able to develop thanks to the attractiveness of the sea and the possibilities that the sea has to offer. New ports for marine yachts will probably also be developed. Developments are also expected in the area of aquaculture and mariculture. Decisions on these issues will be taken outside the framework of the North Sea Policy Document. The Policy document presents no obstacles to these developments, however, other than that the frameworks of the marine ecosystem, the sand extraction strategy and the designated uses of national interest must be taken into account.
The table at the top right displays an indicative overview of relevant sectors / designated uses, with their onshore and offshore spatial dependencies. 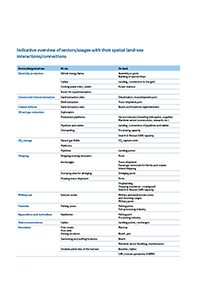