For almost all functions on the North Sea, it is important that the water is clean and healthy. First and foremost, this applies to nature and the ecosystem. Water quality is also regarded as a function of the North Sea. 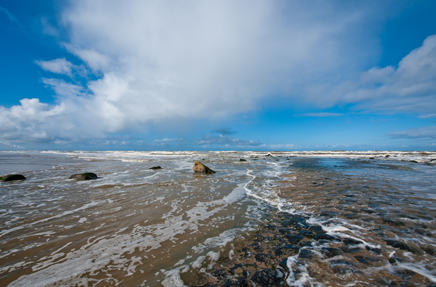 Good water quality means:
→ no excess of nutrients, such as nitrogen, phosphate, and organic carbon
These substances cause excessive algae growth (eutrophication) and disrupt the ecosystem (harmful algae and oxygen deficiency).
→ minimal presence (within the standards) of environmentally hazardous substances, such as PACs, TBT, heavy metals, brominated flame retardants and plasticisers
These substances have a detrimental effect on health and on the reproductive capacity of marine animals. They not only occur as separate entities in the water – they also attach themselves to suspended matter and accumulate in sediment and in living organisms.

The sources of pollution and the seawater itself are not restricted by borders. Therefore, a strong international movement emerged a few decades ago to jointly address the pollution of the seas and oceans. Pioneering work was done in the North East Atlantic area as early as in the seventies, with the Oslo and Paris Conventions. They aimed to reduce the dumping of waste at sea and the discharge of pollutants from land. In 1992, both conventions merged into the OSPAR Convention. Fourteen West-European coastal states and the EU Commission have ratified the Convention. The OSPAR Convention has strong links with the International Maritime Organisation (IMO), which issues regulations for maritime shipping.

In an EU context, a number of directives are important for achieving and maintaining good water quality. They mainly relate to the quality of inland water systems, but they also play their part in ensuring that the rivers flowing into the sea are cleaner.

One typical activity of OSPAR involves working out separate strategies for eutrophication, environmentally hazardous substances, oil, litter and radioactivity. These strategies result in agreements, statutory obligations and guidelines. Every partner to the Convention translates these aspects into national laws and regulations and the management of its own part of the Continental Shelf.

The Netherlands is currently working out the terms of the EU Framework Directive Marine Strategy into Dutch law. This Directive requires the Member States to make a strategic effort to have achieved a good environmental condition in their maritime area by 2020.

Using permits and covenants as a management tool

In recent decades, the permit system has proven to be an effective tool to largely bring pollution of the sea within acceptable limits. Permits enable translating international agreements (e.g. at OSPAR level) into enforceable conditions for the use of the North Sea.
In recent years, the interaction between government and businesses gradually created an environment of shared responsibility. That makes it possible to monitor the various activities with agreements as well as with the permit system. 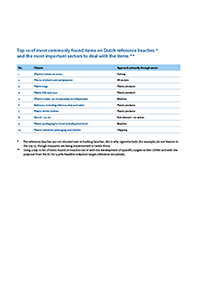 Top 10 of most commonly found items on Dutch reference beaches and the most important sectors to deal with the items (pdf, 550 kB)