The fishery policy for the North Sea is European policy. It is called the Common Fisheries Policy. European fishery regulations are aimed at preventing overfishing and at generating sustainable fish stocks. That is why fishermen on the North Sea must comply with the European Union (EU) regulations. The coastal and inland waters are governed by Dutch regulations. The EU and the Dutch government are stimulating fishermen to develop sustainable fishing methods.

The Dutch marine fishing fleet (around 600 ships) can be divided into coastal and North Sea fishery, industrial maritime fishery (pelagic freezer trawlers), shellfish fishery and trammel fishery. Economically important target species in the North Sea include sole, plaice, langoustine, shrimps, mussels and oysters. Fishery in Figures and CBS can provide more detailed information.
The fishery policy is mainly defined on a European level and is recorded in Regulation (EU) no. 1380/2014 of the Council for the preservation and sustainable exploitation of fishing resources in the framework of the Common Fisheries Policy. That regulation does not apply to fishing for shrimps and shellfish.

The EU’s Common Fisheries Policy obliges the fishing industry in the North Sea to comply with strict measures and regulations in order to maintain sustainable, healthy numbers of fish and in that way guarantee the continued existence of the sector itself. These measures and regulations relate to the permitted catch amount, the locations where fishing is permitted and period and/or number of fishing days, the permitted engine capacity and the regulations for fishing gear and fishing techniques.
In a European context, the development of innovative, sustainable fishing technologies is a major point of focus.
The Dutch fishery policy is strongly targeted at cooperation with the sector so that sustainable fishing can be realised. The Dutch vision of the European Fisheries Policy is recorded in the paper Fish as Sustainable Capital (2009). The new Common Fisheries Policy came into force in 2015.

Zoning and interaction with other uses

Professional fishermen must register their vessels in the Fisheries Register and everybody who wants to fish in the North Sea requires a European fishing permit. In addition, fishermen with vessels that are 12 metres or longer must transmit their logbook data electronically.
To a certain extent, Dutch territorial waters are also accessible to fishermen from neighbouring countries. However, the zone up to 3 miles off the coast is exclusively for Dutch fishermen.
In the zone extending from 3 to 12 nautical miles off the coast, Belgian fishermen may fish for all species of fish, Germans can only fish for cod and shrimps and Danes may only fish for demersal species, sprat, sandeel and horse mackerel. French fishermen may fish for all species in the zone extending from 6 to 12 nautical miles off the coast. In the same zone, fishermen from the United Kingdom may only fish for demersal species of fish, but exclusively in the area between the southern point of Texel west to the Netherlands/Germany frontier.
Only ships with an engine capacity of less than 300 horsepower may fish inside the 12-mile zone and in the so-called ‘Plaice Box’ to the north of the Wadden Islands and in German Bight.
Fishing is not permitted in wind turbine farms, inside a zone of 500 metres around drilling platforms, in shipping routes, approach areas and clearways, above areas where a great deal of munitions are located and in certain parts of Natura 2000 areas. All of this makes up just a relatively small part of all the space on the North Sea. But for fisheries that are more or less tied to a particular area (for example, shrimp fishing along the coast), this means that an integral part of their fishing area is not longer accessible.

Effects on nature and sustainability

In line with Government policy, the fishery sector is adopting more sustainable fishing methods. New technologies for beam trawl fishery leave the seabed less disturbed and prevent unwanted by-catches. To accommodate these technologies in European and national regulations, they may not have any unintended negative side-effects. Research is now being conducted in this field.

In protected nature reserves, the disruptive effects of fishing can only be prevented by means of restrictions or total exclusion. In Natura 2000 areas in Dutch territorial waters, such restrictive measures are being or have been laid down in management plans. In 2009, a large-scale process was initiated to prepare for measures to be taken in protected areas outside the 12-mile zone (Frisian Front, Dogger Bank and Cleaver Bank). In the FIMPAS programme, authorities worked together with the fishing industry, knowledge institutes and civil society organisations.

The farming of fish, shellfish and algae may offer interesting opportunities within the objective of sustainable exploitation of the sea. Experimental space is necessary for various types of marine aquaculture. Mussel seed collection systems would seem to have a promising future as a replacement for the trawl nets (mussel dredges) used to fish for mussel seed on the seabed. This and other types of marine aquaculture may be viable in combination with wind farms.
All initiatives to exploit marine aquacultures require a permit under the Fisheries Act. Important criteria in the granting of permits are the prevention of the spread of diseases when 'dragging' between different locations and the nutrient neutral farming. 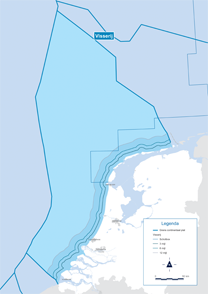