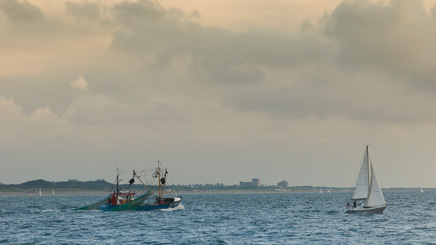 Granting permits for the use of space on the North Sea

However, a lawful user of (a sub-area of) the North Sea has no exclusive right to overall use of the area in question. The user only has the exclusive right for the activity for which the permit was granted within the defined area. This means that there is room for shared use provided this does not result in disproportionate damage or obstruction for first initiator. New initiators must first consult the established initiators in order to come to agreements on how the initiatives can be performed side by side. In the past, in the case of procedures for planning and granting permits, regional processes have sometimes already taken place in the context of the interaction between user functions.

The table displays possible interactions between the user functions. The maps included in the uses indicate some important interactions with other functions. The aim in interactions of use is always to use the space for multiple purposes and to coordinate this use with the established and prospective stakeholders in the sea areas. Experience shows that this kind of planning for the North Sea works well. The central government attaches great value to coordinating the different uses in the area as much as possible during the preliminary phase and takes this into account to the extent possible. As the competent authority, the government is always the one taking the final decision, whether or not the initiators reach an agreement in the preliminary phase.
The government also determines the conditions under which the initiatives are possible in the same area. 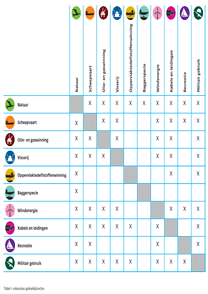